Solana led gains among larger tokens amid a broader jump in global markets. The crypto market has added almost $59 billion in value over the past day following the U.S. Federal Reserve decision to gradually reduce stimulus benefits and taper purchases of government bonds after inflation climbed to a 39-year high.

Tokens of Solana, the fifth-largest crypto by market capitalization, climbed 12% Thursday to $180. Ethereum rivals avalanche and elrond were also among top gainers in early European hours, adding 11% and 13% respectively, according to CoinGecko data. Dogecoin and shiba inu saw muted growth after a rise earlier this week based on reports of electric-car maker Tesla allowing dogecoin payments for its merchandise.

Since early 2020, the U.S. has provided stimulus packages to businesses and individuals and the Fed has purchased nearly $120 billion in bonds each month to boost the economy. That’s helped prop up financial markets worldwide, while becoming a cause for concern among traders worried about the incessant money printing.

Yesterday’s decision bore well for the crypto market, however. While bitcoin, the world’s largest cryptocurrency by market capitalization, is considered a risky asset by many investors and traders because of its volatility, some view it as a hedge against inflation.

“Increased speed of tapering by the FED has been a typical buy the rumor sell the news story. Markets are looking for a tighter monetary policy as a response to record inflation,” Andreja Cobeljic, co-founder of trading intelligence tool Superalgos, said in a Telegram message. ”The short-term correlation between equities and bitcoin is positive and Bitcoin also rose very sharply. It is worth noting that retail buying of Bitcoin has been extremely strong on the lows, recent onchain data shows.”

Bitcoin jumped from $46,000 to over $48,800 on Wednesday after the Federal Reserve meeting. It’s still battling a resistance level of $50,000, one it has tried to break on three occasions this month.

Futures traders are continuing to lean toward the upside, data from analytics tool Glassnode suggests. Funding rates – an hourly or daily fee paid by traders to borrow money from exchanges to place trades – remained positive, implying traders were paying to remain long on their bitcoin positions.

Ether gained ahead of bitcoin with a nearly $450 jump from weekly lows of $3,656 to above $4,000 at press time. The move helped alleviate earlier losses, but ether remains down 10% compared with a week ago. Funding rates for ether futures on Glassnode are negative, meaning more traders are paying to bet against ether’s upside. 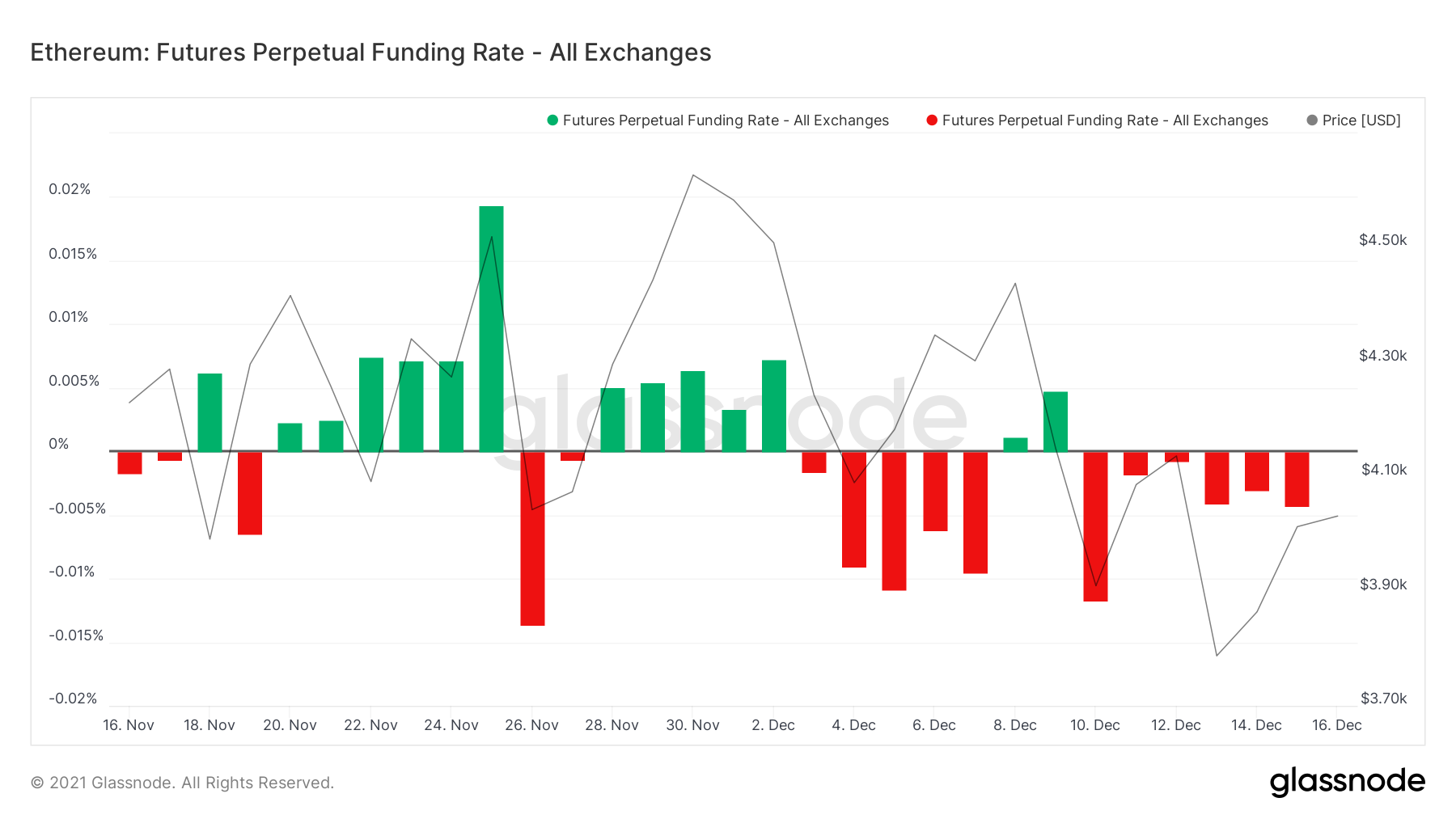 “We think that a short squeeze into the year-end or early January is very possible,” the fund wrote in a Telegram broadcast on Thursday. “Bullish divergences in ETH support our bullish bias and we expect both ETH and Altcoins to outperform on a short squeeze.”

A short squeeze occurs when the price of a financial asset suddenly moves higher, prompting traders who’d bet it would fall to buy the asset in order to avoid greater losses, amplifying the increase. Bullish divergences, on the other hand, occur when asset prices fall to local lows but market momentum indicators do not, suggesting a lack of sellers in the market.