Justin Sun isn’t accustomed to being overlooked nor is he happy when he feels that one of his projects isn’t getting enough attention. Sun, who is known for his self-promotion and marketing stunts at least as much for the Tron blockchain network he founded, is rankled because the recent explosive growth on Tron is being overshadowed by better known rival Polygon. So Sun is using his substantial aggrandizement skills to fix that perception.

While statements from one of the most visible and vocal figures in crypto often can suffer from hyperbole, data shows that a few little-known decentralized finance (DeFi) protocols on the Tron network have surpassed their better-known counterparts, such as Ethereum-based SushiSwap and Polygon’s QuickSwap by certain metrics.

The achievements did not come overnight, according to Sun, who told CoinDesk that growth on the Tron blockchain has been quite “low-key” compared with others, namely protocol Polygon, a “layer 2” product that is built on top of the Ethereum platform.

“We have always been bigger than Polygon, but many in the markets have underestimated us,” Sun said, without specifying the metrics that make Tron “bigger” than Polygon. “After all, Polygon has been a bit more high profile, and we are relatively low-key.”

“Being low-key doesn’t mean we have not been doing well,” Sun added.

But Tron is growing faster in other areas. A report by blockchain data analysis site DappRadar titled “JustSwap on Tron Attracts More Users Than QuickSwap” says that in the 30-day period ended on July 19, decentralized exchange (DEX) JustSwap – Tron’s version of Uniswap on Ethereum – gained about 200,000 unique users, an increase of more than 200% compared with a 1% increase in the same time period on QuickSwap, the most popular DEX on Polygon.

Also in the same 30-day period, JustSwap surpassed QuickSwap and Ethereum’s SushiSwap and was behind only Uniswap – the “unbeatable leader” for DEXes – by unique active wallets, according to DappRadar.

Polygon and the DeFi protocols built on the layer 2 product have become more popular in recent months, as traders and Ethereum-based DeFi projects flock to the protocol for cheaper transaction costs and faster block time.

Also known for cheaper and faster transactions than Ethereum, Tron also has gained traction lately with impressive growth in stablecoin: There are more USDT, the most popular stablecoin, on Tron than on Ethereum already and USD coin (USDC), another popular U.S. dollar-pegged stablecoin, that also recently started supporting Tron.

But the sudden growth of the DEXes on Tron still got some analysts and market participants scratching their heads because the DeFi sector, in general, has cooled down in the recent months, with Ryan Watkins, an analyst at Messari, saying “That’s odd.” The monthly volume on Ethereum-based DEXes to date in July is well below $50 billion, less than one-third of May’s volume. 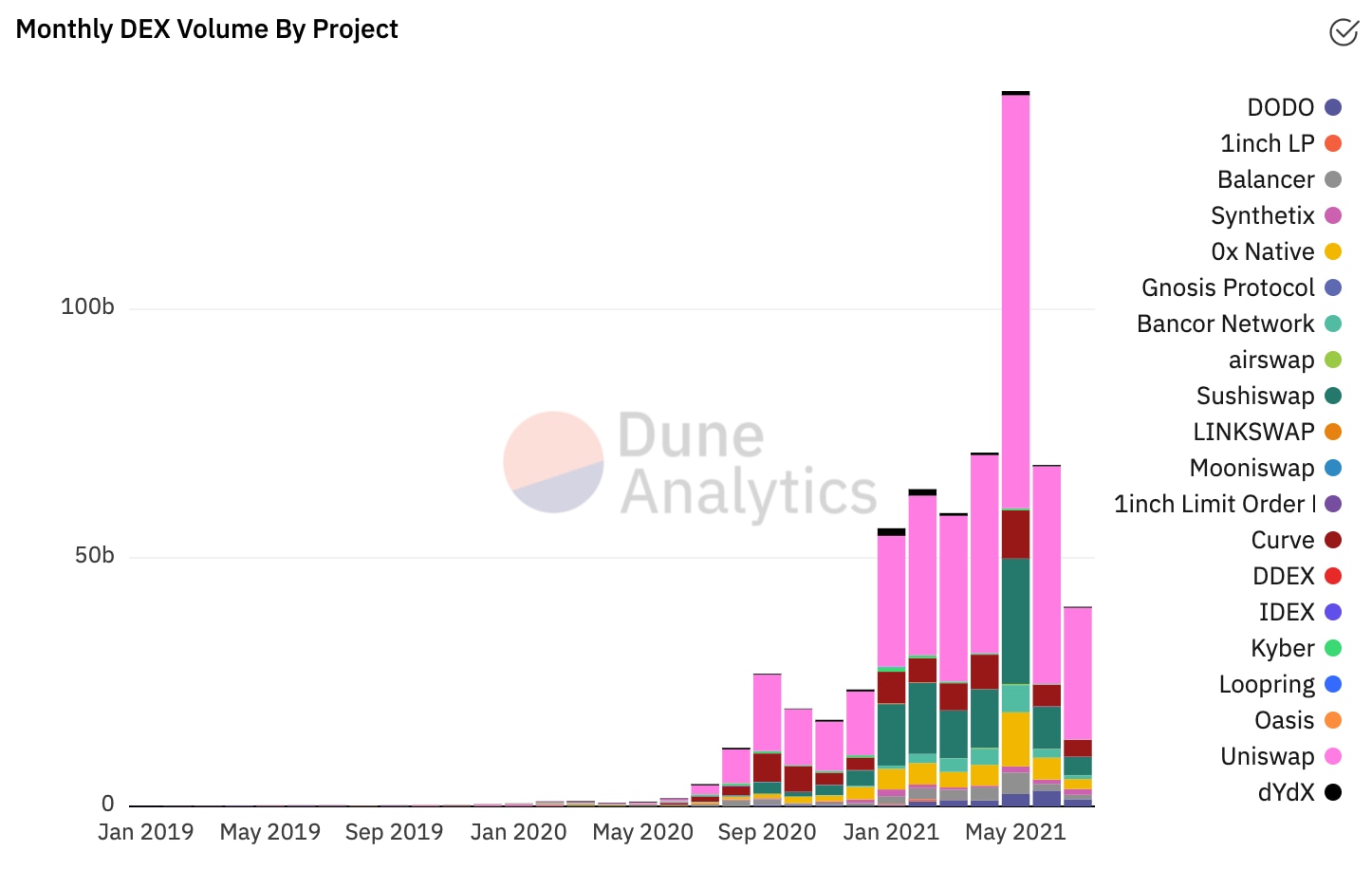 Sun attributed the importance of stablecoin and Asia’s market in DeFi for fast-paced DeFi growth on Tron.

Stablecoins are digital tokens whose values are pegged to fiat currencies like the U.S. dollar. They are used by traders and others as an intermediary step before putting money in riskier cryptocurrencies. While USDT still dominates the stablecoin market, USDC is among the most popular stablecoins in DeFi. With USDC now also supporting Tron blockchain, it is likely that USDC on Tron can boost the development of DeFi on the blockchain.

According to Circle, the crypto financial services firm that powers USDC, one of the goals of partnering with Tron is “enabling [USDC] growth in Asia and around the globe.”

As a businessman born and raised in China, Sun and his success can be largely attributed to the market in the greater China region: Even today as the crypto crackdown is getting tougher in China, his Weibo account (the equivalent of Twitter in China) remains active as he leads discussions about Tron – whether about DeFi or non-fungible tokens (NFTs).

“Tron has always established a substantial market share in Asia,” Sun said. “Many [crypto] users in Korea, Japan and mainland China are used to protocols on Tron. It’s a known fact that in Asia, the crypto market has been performing quite well.”

DappRadar’s report concluded that if DeFi on Tron can continue growing at its current pace, Tron could soon become a “steady” competitor for Polygon, Binance Smart Chain (BSC) and even Ethereum.

But Sun told CoinDesk that he does not view Tron as a potential competitor to blockchains like Binance Smart Chain or Ethereum.

“This is not about who’s taking whose slice of the cake,” he said, using a metaphor about the distribution of the crypto market that’s often used by Chinese. “This is about making this cake bigger altogether…BSC and we are experiencing explosive growth…We can both meet the needs that cannot be satisfied on Ethereum.”